The 'green jewel' of South Leeds, extending to over 300 acres (128 hectares), Middleton Park is Wade’s largest land holding. It is a mixture of traditional parkland and ancient woodland, with fascinating remains of early coal mining and transport links. A very active Friends Group runs an extensive events programme through the year – including brass band concerts and outdoor theatre, guided walks and children’s craft and nature activities, together with an annual produce show.

The Park has undergone a significant amount of change and development in recent years, brought about by a close working relationship between Leeds City Council, the Friends of Middleton Park (FOMP) and Wade’s Charity. A £2m investment by the Heritage Lottery Fund, funded a new visitor centre, bandstand and better paths, benches and interpretation of its natural and historic features.

Further change is planned. The municipal golf course closed at the end of 2014, and the City Council, together with FOMP and Wade’s are working together on plans to integrate and develop this area within the Park.

The first project completed was a new seating area and viewpoint, looking out over the historic parkland and former golf course. ‘Nick’s View’ forms a focal point for one end of a new vista looking down towards the visitor centre and café, to encourage visitors to explore and enjoy this new area of open space.

The viewpoint, seating area and walnut trees are dedicated in memory of Nick Rose, former Chair of the Friends of Middleton Park and Wade’s Charity Trustee.

The Friends of Middleton Park were involved in the concept and design of the new seating area and pupils from Middleton St Mary’s school helped with the planting.

The project was jointly funded by Wade’s and Cobbett Environmental, a charity that funds projects focused on environmental improvements supporting a local community. It does this as part of the Landfill Communities Fund, which is a tax credit scheme enabling the development of a wide range of projects in the vicinity of landfill sites.

The part of the former golf course owned by Leeds City Council has now been transformed into a very well used community and regional facility for cycling, Leeds Urban Bike Park .  This is run by Cycle Pathways Community Interest Company.  The former clubhouse has been refurbished to house bike repair, educational and social facilities, together with a bike shop and café.  Outside  there is a BMX pump track and mini pump track. Cross country mountain bike trails suitable for all levels of cyclists have been built on what was the golf course and through the woodland on Wade’s land. Developed with major funding from by British Cycling, Leeds City Council and Sport the facilities have been designed to cater for everyone, regardless of age, ability or cycling experience.

For more on the Park see:

Gott’s Park on Armley Ridge Road sits in a prominent position above the Aire Valley, with views along Kirkstall Vale to the Abbey and in the other direction to Leeds City Centre.

The Park takes its name from Benjamin Gott, the wealthy Leeds merchant, woollen manufacturer and civic leader. He bought Armley House and its parkland at the turn of 19th century. From here Benjamin Gott could look down on one of his factories – Armley Mills, now Leeds Industrial Museum.

Benjamin Gott employed the eminent landscape designer, Humphry Repton, to advise him on enhancing the park and house. The remodelling of the house in the fashionable Greek Revival style (the first use of this style in West Yorkshire) was completed around 1820 under the guidance of architect Sir Robert Smirke.

Armley House and its park were acquired by Wade’s Charity in January 1928, and leased to Leeds Corporation opening as a public park in July 1928.

In the early 1930s a municipal golf course was constructed in the Park, providing work for unemployed people in the locality.

In April 2015, members of Gott's Park Golf Club formed a Community Interest Company to take over , following Leeds City Council’s decision to close it as a municipal golf course.

Know locally as Gott's Park Mansion, Armley House, a grade 2 listed building, is partially occupied by the Golf Clubhouse. Wade’s Charity Trustees have concerns about the condition of this important historic building, and is encouraging its tenants, Leeds City Council, to find a long term sustainable future for a fully restored house.

Public footpaths and trails linking Gott's Park with Armley Park and the Industrial Museum at Armley Mills allow the public to enjoy the steeply wooded banks, down to the Leeds Liverpool Canal and a perimeter walk around the Park, with splendid views in all directions.

In Autumn 2016, a group of local people came together to form a Friends Group, focused particularly on making the Parks a more attractive and safe place for children and families.

The Friends of Armley Park & Gott's Park's vision is to:

Find out more about their activities on the Friends’ Facebook page.

Wade’s Charity is providing funding in partnership with the Council’s Parks & Countryside Service to bring a part-time Ranger to Gott's Park. Using Gott’s Park Mansion as her base, Claire Rogers is working with the Friends Group and Golf Club to run a range of events and practical volunteering activities in the two Parks. See the Wade’s Ranger Facebook page for more information.

In 2016/17 volunteers from the Golf Club gave the ground floor of the Mansion a facelift to make it more welcoming for all visitors to the Park. With financial support from Cobbett Environmental and the City Council’s Wellbeing Fund, ugly partitions have been removed to open-up the entrance hall and create a more welcoming reception, refreshments, visitor information and events space. The public toilets have also been refurbished and a disabled toilet installed. In 2019 the space was used to house an exhibition on Humphry Repton in Yorkshire.

Cobbett Environmental is a charity that funds projects focused on environmental improvements supporting a local community. It does this as part of the Landfill Communities Fund, which is a tax credit scheme enabling the development of a wide range of projects in the vicinity of landfill sites.

Cobbett Environmental gave further funds for projects in Gott's Park, matched by funds from Wade's and Leeds City Council Section 106 funds.  The Wade's Ranger, volunteers from the local community and corporate groups, the Friends and Parks & Countryside staff  have all worked together to plant a community orchard, create a growing and events space in the former Rose Garden, improve footpaths and reinstall historic railings at Gott's Park Mansion terrace.

Leeds Beckett University, Headingley Campus looks out over this Park, which is well used by students and local residents. Beckett Park takes its name from the Beckett family prominent in banking and politics in 19th century Leeds. The family purchased Kirkstall Grange House, now occupied by Leeds Beckett University and adjoining parkland in 1834.

Wade’s Charity acquired the land in 1909 and leased it to the City Council to create a public park in 1911. Today the Park has tennis courts, a children’s play area, skateboard park, recently installed outdoor adult exercise equipment, and a cyclepath/footpath through the Park from Queenswood Road to Batcliffe Drive.

Formed in 2014, and now with 70 members, The Friends of Beckett Park , works with Leeds City Council and Wade’s on projects to improve facilities for users of the park, whilst retaining and restoring its historical features. Over 650 trees have been planted, replacing some of the 200-year old parkland trees which had been lost and extending and replanting copses and wetland patches. A new mowing regime has been agreed with the Council’s Parks & Countryside Service, with grass left to grow long in some areas to benefit insects, birds and other wildlife and to reduce the stress on the mature parkland trees. New benches have been installed and built, more than 4000 bulbs planted and a wildflower pollinator bed sown.

The Friends have raised funds from Tesco’s Bags of Help scheme, St Chad’s Small Grants Fund and Wade’s Charity and received donations of trees from the Woodland Trust. Future plans include restoration of the wrought iron railings and gates at the St Chads Drive entrance to the Park.

At Kirkstall, Wade’s land includes the Vesper Gate playing fields, together with the land on which the Kirkstall Abbey Park visitor car park and children’s play area are located. 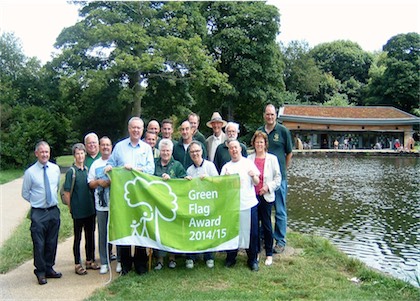 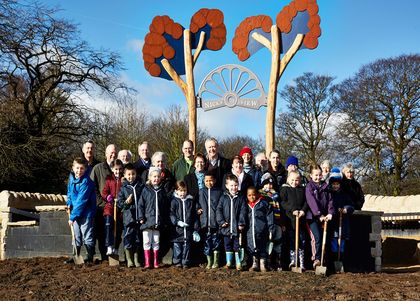 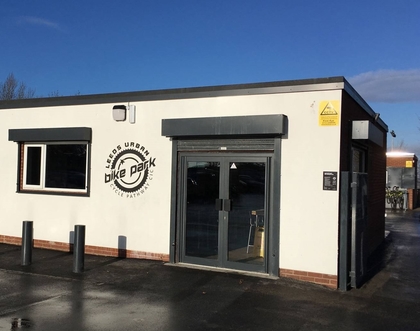 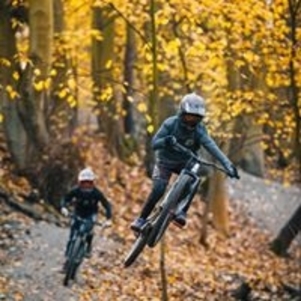 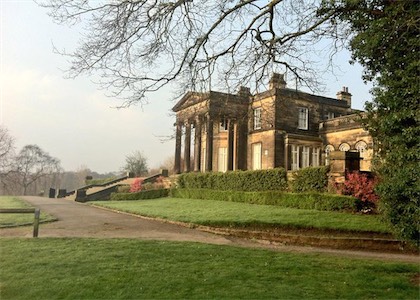 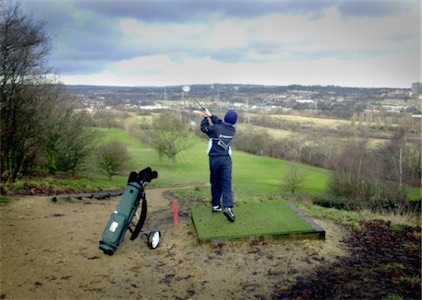 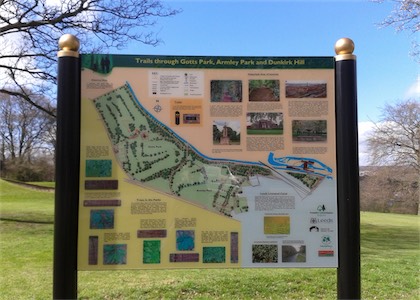 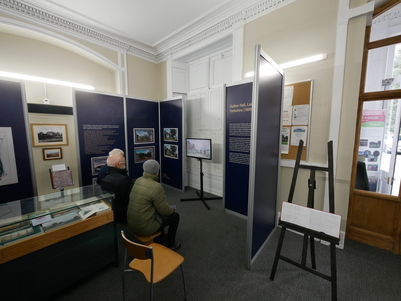 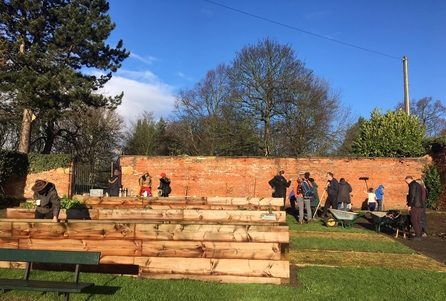 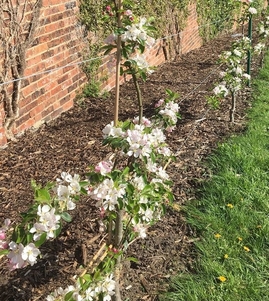 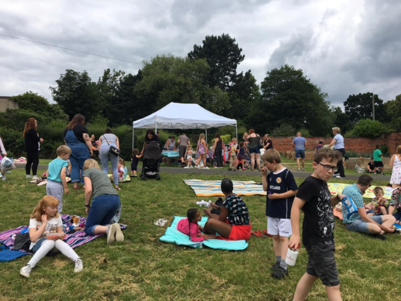 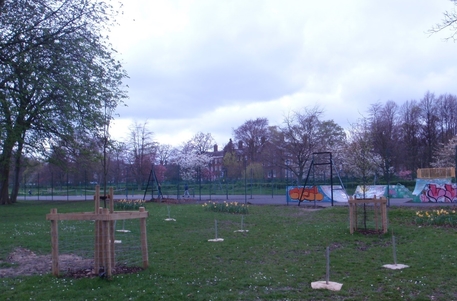 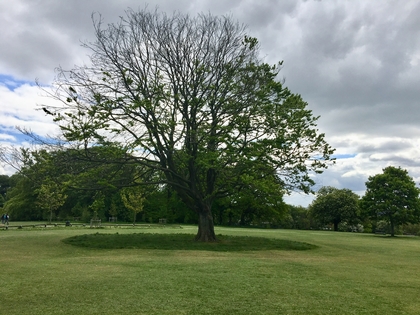 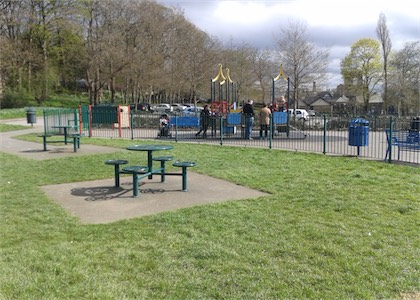